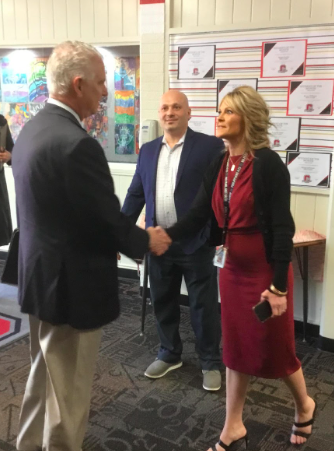 It’s not every day that you would invite honored dignitaries into your home, and then proceed to show them all of the ugly areas, including the dark, objectionable, dilapidated areas that can no longer be covered up or painted over. These are the parts in stark disrepair, including the sections that, if left unattended, could actually cause harm to people.

That’s exactly what Lake Ridge New Tech Schools Superintendent Dr. Sharon Johnson Shirley did for two Indiana State Senators who were on a fact-finding mission to the district to see if additional state dollars should be allotted to help struggling schools maintain their buildings.

“When I met with Senator Bassler, I gave him our story,” she said. “We have a great school district, we have high poverty, we have dilapidated buildings, and we have a lot of work needs to be done, but we don’t have the funding. He told me that all sounded quite compelling, but he needed to see it. So, I extended him an invitation and he came.”

When Bassler and Melton arrived to tour the district, they were welcomed at each school by an administrative team and student ambassadors. What they found were clean, well-manicured, and orderly buildings. But when they looked just beneath the surface of the polished exterior, they saw a different story.

Cracks in the foundation in toilet stalls.

Cramped and outdated work out facilities

The senators were also shown the Calumet New Tech High School Auditorium. This part of the tour had to be given by cell phone flashlight, as for the past four years, there have been problems with house lighting. A year ago, the 600-seat venue was condemned by the fire marshall due to safety concerns.

According to Lake Ridge Schools Facilities Manager Corinne Rensch, the wish list for building and grounds improvement could cost an estimated $20 million. She cites repairs to the auditorium, replacing heating and air conditioning units, restroom repairs, replacing the roof at the high school field house, and repaving the high school parking lot as priorities.

“For example, when it comes to heating and cooling the classrooms at the high school, if the second floor is happy, the first floor is miserable,” Rensch said. “The building has zone heating, which is an older heating system. It uses boilers and steam. We need to go to what is called a VAS system, which regulates each room.”

CNTHS volleyball player Hayley Shaw expressed concern for the safety of athletes who use the basketball/volleyball court.

“The ceiling in the gym leaks when it rains, and it gets really slippery. One of our players slipped, and we had to stop the game to move the net,” Shaw said.

The student-athlete also voiced concern about the school’s weight room.

“Our weights are not the safest,” she said. “During summer conditioning for volleyball, I picked up one of the weights and the dumbbell actually broke and almost hit my foot.”

“If possible, I would like to see the gym floor be redone, the roof patched up, and the weights in the weight room replaced.”

“It’s very important to go out and roam through schools and meet with teachers and principals,” he said. “It gives me a better sense of what the challenges are. I got a better feel for things that are going well and things that are not going so well.”

Bassler said changing economic conditions have made things difficult for public schools across the state.

“In respect to this school corporation, I see there has been a general decline going back to maybe 2016 in property tax revenue for the school corporation. That’s OK for a little while, but at some point, it starts to take a toll, and we see that with some of the facilities here,” he said. “I think the superintendent, the principals, and custodial staff are doing a good job with what they have to work with, but I cannot help but think that one thing that is going to put the school in a bind is that decline in property tax revenue.”

Bassler said the problem is not limited to Lake Ridge New Tech Schools.

“I have heard other people talk about the fact that in districts that are, for lack of a better term, ‘low- to moderate-income’ districts, there is a tendency for property tax revenue to trail off. I’ve seen that in other districts. It gives you pause. What is the answer to that?”

According to LRNT Schools Chief Financial Officer Adrian Wilkerson, the answer lies in a statewide redistribution of school funding.

“What I would say is that for communities with a low assessed value and property tax base, along with the crippling effects of the Circuit Breaker [the Indiana law that limits a taxpayer’s annual property tax liability], they have to decide either it is in your interest to pass a referendum to provide the school district with additional funds, or have some sort of reform to the Tax Increment Finance district where the [Northwest Indiana Hard Rock] casino is located.”

The 1996 Calumet High School graduate, who is now an attorney, does not believe the latter is likely to happen.

“Currently, school districts only have an advisory voice on the Redevelopment Commissions that dole out that money,” said Wilkerson. “That’s some high-stakes funding that, if made available to Lake Ridge or made mandatory that Lake Ridge receive a portion of the TIF money, could be a boon to low-assessed communities.”

Unfortunately, for that to happen, a massive legislative battle will have to be fought. Sadly, for today, the students in Lake Ridge New Tech Schools are going to have to strive for an education in antiquated buildings, under decaying conditions.